Except for some school experiences, I have two main experiences with network engineering. Most of my networking knowledge I got in my first full-time job. I worked for one of the biggest internet services providers in Prague, the capital city of the Czech Republic. I started there as a common technician, which manually installed network devices, mostly wireless APs and receivers. I soon worked my way up to the project manager position, who proposed modifications to the whole network. Daily I designed new transmitters, adjusted the hardware structure of the entire network, assigned work to colleagues, and much more. 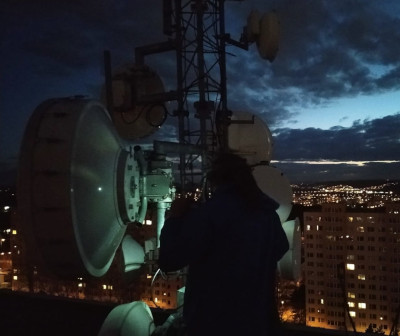 Network engineering and managing are the main work in my actual job. I'm working as a head network engineer at one of the faculties at one of the largest universities in the Czech Republic. Every day I analyze whole network traffic, improvind firewall policies, connecting new devices to the network and doing general IT support for our users. Periodically I also actualizing switches, routers, acces points, firewalls and other network devices or design and implement network upgrades.

During my career as a network engineer, I met a lot of network devices and software developed by various companies. I worked most of the time with Mikrotik devices - their RouterOS system I know very well. In my last job, we had most of the network elements from Aruba (HPE). Among other manufacturers whose devices I have worked with, I could name, for example, Ubiquity (in most cases Unifi), Cisco, Juniper, Alcoma, TP-link, Netis, etc.

My kitesurfing experiences began at home, on my sofa, when I watched awesome kite videos on youtube. In the autumn of 2019, I quit my job and flew to the Canarian islands to learn how to kite. I had a few lessons there, but because there aren't the best wind conditions for kitesurfing I flew to Cape Verde soon. Specifically, I chose Sal island, which is very popular among the kiters community. Sal is home to many world-class kiters, such as Mitu Monteiro, Matchu Lopes, Airton Cozzolino, Elvis Nunes, and Djo Silva. It's great to meet them on the kite spot and be able to chat with these stars.

I chose for learning 100 Feet Kite School and I recommend it. Unlike many kite schools in Santa Maria, they are based directly on the kite beach, so it's not just about taking the course and learning how to kite, but also about the community that is built around this kite school. Whether from the locals of Santa Maria on Sal, or from the kiters who arrive on the island.

The first time I was in Cape Verde, I spent almost three months there, which was enough to make me an independent kiter - of course still a beginner. Since then, I'm returning to Cape Verde every winter, because in winter there is the certainty of a strong stable wind almost every day.

In addition to kiting by the sea, I have already tried kiting in the Czech Republic - however, with ideal conditions in Cape Verde, kiting in the Czech Republic can not be equal in any case. On the one hand, we don't have a stable wind here, enough strong wind for kiting there is only a few days a year, and especially when it's blowing, it's also very cold, which rapidly reduces the quality of the experience.

My first experience with Linux I got at school. I started with Ubuntu Desktop, but in a short time, I changed the brand to Fedora, which I'm loyal to these days. At school, I absolved 3 semesters of understanding and programming in shell, specially BASH.

My second full-time job was administrating plenty of Linux servers at one of the biggest data centers in the Czech Republic. These servers were running Debian or Ubuntu. Every day I had to set up Nginx and Apache servers, solve problems with sending emails, set up MariaDB databases, change DNS records, analyze logs, and much more. I got lots of experience with administrating Linux servers there.

This page using only one essential cookie to save actual language, if user switch it. This cookie expire after 10 years. This page doesn't use any performance cookies.